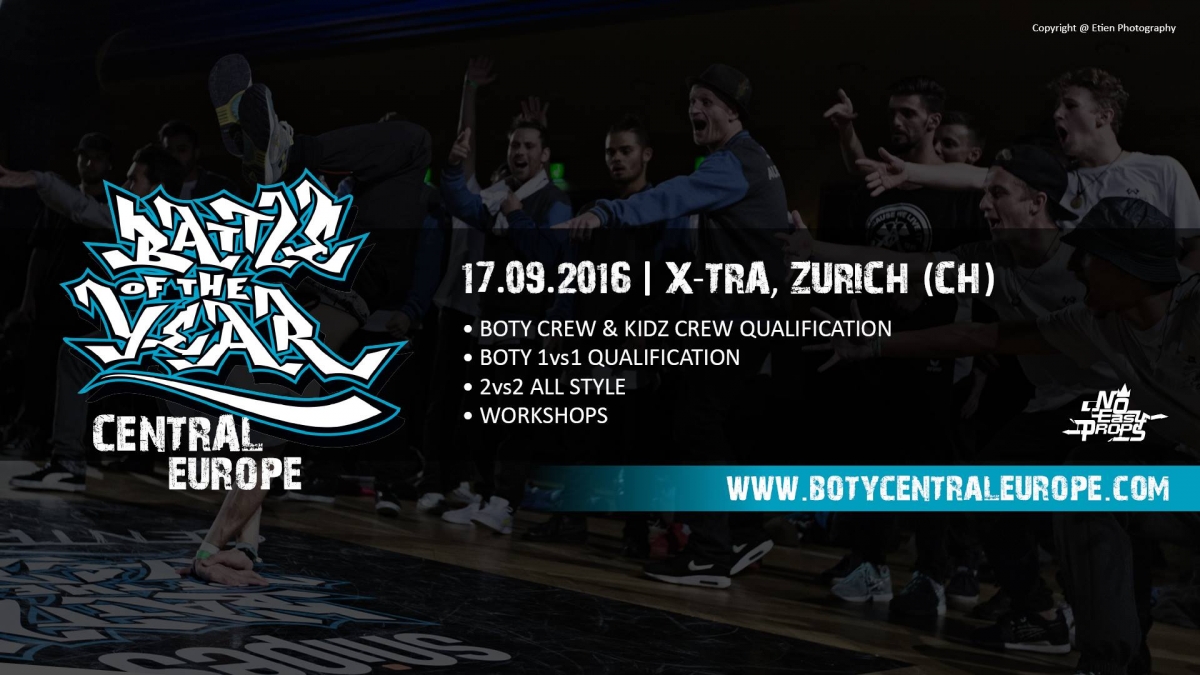 More info and line up coming soon!!
SAVE THE DATE!!

NEW: BATTLE OF THE YEAR KIDS - GET READY

Battle of the Year starts a new BOTY Kids Format
Generally the same rules as in the regular BOTY competition
Youth development and chances for young crews
For participants until 15 years
Together with some international partners Battle of the Year opens a new chapter in the BOTY history in 2016 and introduces in diverse qualifying competitions and in the world final in Essen their brand-new “Battle of the Year Kids” concept, in short BOTY Kids.

The basic idea behind this concept which will be carried out in 2016 for the first time, consists above all in providing the young generation the opportunity to gain experience in one of the most famous and biggest breaking competitions in the world. In addition it is a good chance to become active with one’s own crew, to compete and to compare oneself nationally and internationally with dancers of the same age or older and experienced ones. This provides new training objectives and promotes exchange and motivation of all active generations.

Which rules are to be followed?
• Basically the same rules as in the “normal” BOTY
• Kids must not be older than 15 (year of birth 2001)
• A show of maximum 6 minutes
• Unlimited number of dancers per crew
• Final battle with the first 2 crews from the ranking

Attention! Crews with one or several participants being older than 15 years slip automatically in to the regular Battle of the Year. For participation in the BOTY Kids all participants have to identify themselves with an official document.

How is BOTY Kids carried out?
Basically there are two different opportunities to integrate BOTY Kids into an officially national or regional Battle of the Year qualifying event. This can be treated differently and underlies the decision of the respective organizer.

“Integration of BOTY Kids”
Kids Crews will be integrated in to the regular BOTY process, i.e. adult and kids groups are not separated. The kids shows will be valued according to the same criteria as those of the adults. Both categories will be listed in the same ranking but have their own final battles, i.e. adults’ final and kids’ final. If there is a kids group which is strong enough to make it with other adults groups in to the TOP4 (or TOP6), this group takes part in both categories (adults‘ final and kids‘ final). In the final of the kids the two crews with the highest number of points compete against each other on the same principle as in the regular BOTY. In case one kids group wins both categories (BOTY Adults and BOTY Kids) the second best crew gets the chance to represent their country in the BOTY Kids World Final.

Travel, board and lodging
Each crew is responsible for its travel and for all costs involved itself. The organizer does not have to bear the travelling costs of the winner group. In order to support the winner group to finance their travel to the BOTY Kids World Final in Germany the organizer can announce prize money.

Qualification for the World Final in Essen
The groups qualify in the official BOTY Kids qualifying competitions for the international Battle of the Year in Essen (Germany). The international “BOTY Kids World Final” will take place in the afternoon on 29th October 2016. The winners get the chance to present their show on the BOTY main stage in front of the whole audience on Saturday night.

The Battle of the Year team has decided to integrate a maximum of 6 crews for the first BOTY Kids 2016. All qualifications have already been fixed. All kids groups who qualify for the world final must arrive in Essen on Friday 28 October 2016 until 13:00 o’clock. „BOTY International“ will take care of board and lodging for all crews consisting of maximum 9 persons including the coach. .